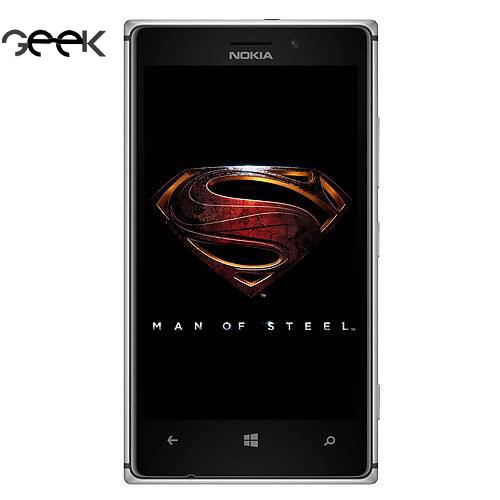 NEWS ALERT: Nokia to come up with a special Lumia 925 Superman edition phone.

According to sources, Nokia is all set to launch a Lumia 925 Superman edition smartphone right after the movie Man of Steel is released. The features are expected to be the same as the Lumia 925 vi. the 1.5 GHz Dual-Core processor, 8.7 MP Pureview camera & a 4.5 inch AMOLED HD display protected by Gorilla 2 Glass.
This limited edition device will be a treat for all Superman fans.

How many of you would love to own this limited edition smartphone?

Introducing Xbox One, the all-in-one entertainment system. This is the unveil video for the Xbox One, showcasing the console, the new Kinect sensor and the new Xbox One controller, as well as the new experiences that will be coming with Xbox One, including the personal homescreen, cinematic gaming, Live TV and Skype. Welcome to a new generation of games and entertainment.

Rumors that Apple is preparing major design changes with iOS 7 continue to heat up, with new reports suggesting a more muted and flat design aesthetic.

Last October, Jonathan Ive became responsible not only for the look and feel of Apple hardware, but also its software. By most accounts, I’ve is not a fan of the skeuomorphic heavy design cues that currently dominate iOS.

While we previously heard rumors that Ive was planning a broad UI overhaul with iOS 7, we didn’t have many specific details. Now, 9to5 Mac is reporting that Ive’s look for iOS 7 will be “black, white and flat all over.”

According to 9to5 Mac’s sources, many of the textures currently present in iOS — linen on the notifications panel and leather in the calendar app — will be replaced with flat black and white colors. As for the home screen, apps will no longer have gloss, shadows and shine applied to the icons, but their corners will remain rounded.

9to5 Mac also suggests that apps such as Mail, Calendar and Maps will gain a more unified look. The report suggests that all apps will share a similar white base each with its own unique color scheme.

The green felt from Game Center and the wooden shelves from Newsstand have also reportedly been removed.

These moves coalesce with more general trends we’ve seen in the last 12 to 18 months in mobile and web design. In fact, we’ve see concept videos from fans that mirror many of the rumored changes headed towards iOS.

The big challenge with an iOS overhaul, of course, will be balancing the need for something new with the familiarity the system has with hundreds of millions of users.

What do you think of the rumored plans for iOS 7? Let us know in the comments.

While the world debates as to which is the better smartphone between the HTC One and the Samsung Galaxy S4, one area where the Samsung has managed to strengthen it’s hold is the User Interface. Hands down, the TouchWiz UI from Samsung is one of the best custom Android experience you can get on a smartphone.

With the Samsung Galaxy S3, the company introduced a new set of “Smart” features and one of the most notable of those features was “Smart Stay”, which kept the screen turned-on if a user was looking at it, irrespective of the screen settings.

This year, with the announcement of Samsung Galaxy S4, things only got better on the software front and the company introduced many new, interesting features for it’s TouchWiz user interface.

So, lets take a look at all the new features (and some old ones as well!) and see, how well they work on the Samsung Galaxy S4.

Smart Scroll and Smart Pause
First up is Smart Pause, which will pause a video when the phone detects that the user is no longer looking at the screen. Once the user turns his eyes to the screen again, the video starts playing automatically.

Using Smart Scroll, the Samsung Galaxy S4 will be able to scroll the content of the browser or emails by monitoring a user’s face looking at the screen as well as his or her wrist movement.

Along with Air View, the Air Gesture functionality allows users to change a music track, scroll around a page or accept a call by waving their hands in front of the device’s display.

S Translator
Planning to travel abroad? Well, because if you are, you won’t face a language barrier, all thanks to S Translator, which covers 9 languages French, German, Italian, Chinese, Japanese, Spanish, etc. and supports text-to-speech and speech-to-text.

S Health turns your Samsung Galaxy S4 into a fitness tracker and utilizes the Galaxy S4′s sensors to monitor a user’s health. Moreover, it allows the smartphone to sync with third-party devices like blood pressure monitors, glucose meters, etc. over Bluetooth, to give you a detailed look at your health.

This is one feature that can come in quite handy, when used with the right accessories.

IR Remote
Out of all the features mentioned till now, the IR remote functionality is the one that you are bound to use most often. The Samsung Galaxy S4 gets an IR Blaster, which turns your smartphone into a remote control using which, you can control your TV, Set Top Box, Home Theater and what not!

This was a detailed look at all the new features from the Galaxy Samsung S4. So, do you like the new offering from Samsung? Are these new innovative features good enough to make you spend your money on the smartphone? Do let us know in the comments section!

Microsoft’s next-generation console is finally here, the Xbox One.

The Xbox One is all black and features a two-tone finish with both matte and gloss in equal measure; a slot-loading Blu-ray optical drive sits out front on the left face, while a power button with the traditional incomplete circle symbol is emblazoned on the right side (which looks to be touch-based). A new Kinect was also unveiled, and it powers the console — “Xbox On” is being trumpeted as the most important feature.

“Team Xbox is on a new mission,” Don Mattrick, president of the interactive entertainment business, said.”And that mission is focused on making this an entertainment console.”

He said the goal is to build a system that lines up games, television and software and that the most important part is that it must be “simple, instant and complete.”

“It is time for technology to step behind the curtain and you and your entertainment to take the stage,” Mattrick said.

Yusuf Medhi, senior vice president of Microsoft’s interactive entertainment business, unveiled how voice input can be used to control Xbox One. It will also respond to gesture controls.

“Xbox On” turns on the hardware to power up an instant-on system with a new Home dashboard that is near-identical to Microsoft’s Windows 8 operating system.

There’s instant switching from the Xbox One dashboard to live television (which seems to confirm that HDMI-in rumor). People using Skype on Xbox One will be able to do group chats now.

Mark Whitten, corporate vice president of Xbox LIVE, said the console can detect your heartbeat when you are exercising, using the Kinect sensor.

The Xbox One’s controller was created with game players, Whitten said. It will have improved ergonomics and a new d-pad. ”This is your controller,” he said. The triggers now have a built-in rumble system, which Microsoft’s calling “Impulse Triggers,” and there’s now also a redesigned D-pad. The battery compartment, meanwhile, is much smaller than the previous version.

Whitten said the Xbox One will use more power than the entire world did in 1999.

EA said that it is developing four games for Xbox One: FIFA, Madden NFL, NBA Live, and UFC, which will release within the next 12 months.

EA Sports Ignite has been unveiled: “to blur the line between real and virtual.” It will utilize the Xbox One’s exclusive updates for enhanced game play.

“Sports are as much about your head as your feet or your hands,” Microsoft said.

Forza Motorsport 5 announced for Xbox One and will be available at launch. Microsoft Studios plans to launch 15 new games in the first year of Xbox One, including 8 brand new franchises.

Sony’s weatherproof Xperia Tablet Z was shown off at the launch of the Xperia Z, but the company did not announce its arrival into the Indian Market. Up until now anyway! Sony India has confirmed that the Sony Xperia Tablet Z will be available starting Wed 29th May in India for a price of Rs. 44990/-.

Sony has a lot of firsts for the Xperia Tablet Z, including the thinnest tablet title. The Xperia Tablet Z measures in at only 6.9 mm making it the slimmest tablet in the world. The Tablet runs Sony custom TimeScape UI on top of Android 4.1 and will also get the Android 4.2 update later this year.

Hardware wise the tablet comes with a 1.5GHz quad-core Qualcomm Snapdragon S4 Pro chipset along with an Adreno 320 GPU and 2 Gigs of RAM. You also get 32 GB of flash storage and dual HD cameras with a 8 MP main camera and a 2.2 MP front camera both capable of 1080p video.

The Xperia Tablet Z is LTE equipped and comes with a micro SIM slot for network connections over GSM networks. A 6000 mAh battery powers the tablet a sealed Xperia Z design form keeps it water resistant and dust proof. We will get you live updates from the launch on our social networks as well as on our blog, stay tuned.

The Samsung Galaxy Mega 6.3 is the new Android Phablet from Samsung and it has the same candybar look as its predecessors, but with a bigger size and better features onboard. The phone features a 6.3-inch TFT touchscreen with a resolution of 1280X720 with 233 ppi pixel density; the phone also supports multitouch gestures. With 1.5 GB of RAM the device is fast and should handle intensive tasks without any lag. The ultraslim phone runs on Android v4.1.2 (Jelly Bean) and is powered by Dual-core 1.7 GHz Krait processor and Adreno 305 graphics for fast gaming and seamless multimedia. Samsung’s TouchWiz User Interface makes the phone fun to use. Like all smartphones these days, Samsung Galaxy Mega has proximity sensor, accelerometer and compass.